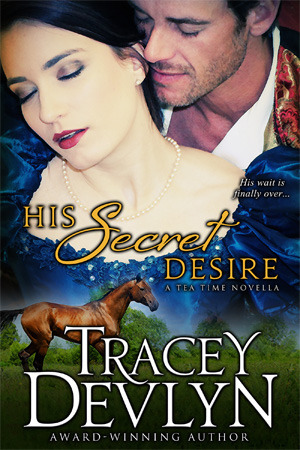 Beads of sweat trickled down the valley between Lily’s breasts; the early morning heat a prelude to another sweltering August day. She continued her firm, long strokes along Alaric’s back, causing his muscles to ripple beneath her hands. His eyelids drooped in sleepy contentment.

“How does that feel, my love?” she murmured near his ear. “By the time I’m through with you the pain shall be a distant memory.”

“Does this tempting guarantee extend to your neighbor?”

Lily’s heart struck hard against the wall of her chest, disrupting the comfortable silence of the stables. The rich baritone of Julian Lyons’s voice slipped past the wall of her reserve with every delicious syllable. Since her father’s death a year ago, Lord St. Vincent had begun visiting more and more often, checking to make sure she had everything she needed, asking about their stable’s operation, and joining them occasionally for dinner. Each of his visits ended with a terrible longing for something she could never have.

A viscount. A powerful, wealthy member of the peerage who would never be attracted to a young woman who mucked out stalls and had questionable fashion sense. With her brother Bennett’s recent escapades in London, she had been forced to release several servants, which meant their duties now fell to her.

Lily braced herself for the deluge of questions that would no doubt spill forth from his lordship’s too tempting mouth. The last thing she needed was for Lord-of-a-Thousand-Questions to plague her this morning while she tended to Alaric, her brother’s prized stallion.

One more month, Lily reminded herself. Once Alaric won the St. Leger race, she would be able to hire back her servants back and pay off Bennett’s debts. One month wasn’t so long. She could do it.

Her resolve renewed, Lily blew an ebony curl away from her eyes and patted Alaric’s long, sleek neck. She whispered her apologies before turning around to acknowledge the most handsome, frustrating man she had ever met.

As was its wont lately, her heart leapt at the sight of his impossibly blue cerulean eyes and rich chestnut hair. His broad shoulders tapered down to lean hips and attention-drawing muscular thighs encased in buckskins. She loved it when he wore buckskins. They managed to cover every inch of his lower body, yet their snug fit revealed so much to her interested gaze.

Alaric snorted and stomped his hoof, almost as if he divined her inappropriate fascination of her out-of-reach neighbor. Snapping out of her trance, she dipped into an abbreviated curtsy. “Good morning, Lord St. Vincent.”

His eyes flicked to her legs, causing heat to suffuse her cheeks. To allow for greater movement, she had begun wearing trousers while doing chores in the barn. Lily didn’t regret her choice except for moments such as this. Executing a curtsy in trousers seemed wrong somehow, as though she should bend at the waist instead.

“Good morning, Miss Weston,” Lord St. Vincent replied with a deep bow that was far too formal for a dusty stall in her brother’s horse barn.

As usual, the viscount defied convention by leaving the strong column of his golden neck bare for Lily’s inspection. The smattering of curly black hair peeking out above his open collar drew her eye and she could not help but wonder what else lay hidden beneath his casual ensemble of camel- colored coat, buckskins, forest green waistcoat, and billowing white shirt. Every thread wrapped around his tall, masculine frame like a favorite pair of gloves.

Startled, Lily realized he had been talking to her while she stood ogling his body. Again. “Pardon, my lord. Is there something you needed?” She infused as much impatience in her tone as possible. It didn’t take much effort. Until she brought home Alaric’s winnings, she didn’t have the time to indulge in a pointless, one-sided infatuation with her neighbor.

“I asked if you’d seen Weston. He wasn’t at the house.”

Silence greeted her revelation; the only sound coming from the sure, even strokes she plied across Alaric’s withers.

“This morning, you say?”

“I’m sorry to disturb you, but I must speak to your brother posthaste. Did he mention when he might return?” His implacable tone told Lily this was more than a social call.

Lily ducked under Alaric’s head to brush down his other side. This new position afforded her a direct view of St. Vincent. “No, my lord. Is something wrong?”

He squared his shoulders and focused his intense blue eyes on her. “In a manner of speaking, yes.”

“What has my brother done now?”

“I’m afraid that must remain between Weston and I.”

An unwelcome fear swirled in her stomach. Of late, her brother’s visitors consisted of merchants flashing bills and gentlemen calling to collect on wagers won. She couldn’t recall the last time St. Vincent had called at Springhaven to speak specifically with her brother. Lily bit the inside of her lip until the pain forced her to let go. She had always dealt with St. Vincent in a straightforward manner, however, she balked at the idea of revealing the full extent of their financial difficulties.

Oh, well, it couldn’t be helped. It was best he understood how shallow the well really was at the moment.

“If you’ve come about a debt, we’ve little more than this farm at the moment. Once Alaric wins at Doncaster, I can settle with you, then.”

At the mention of Springhaven, St. Vincent’s eyes flickered away and his spine grew more rigid. Lily braced her hands upon Alaric’s warm, broad back. While she waited for a response, time slowed and the scents of the barn assailed her; horse flesh, manure, hay, dust, sweat, and the masculine scent of sandalwood.

“Does my brother owe you money, my lord?”

He made a casual inspection of the barn before his gaze fanned over her face. His attention lingered on her mouth for one heartbeat, two, three. Lily’s stomach knotted in awareness despite the seriousness of the situation.

“Lord St. Vincent?” She forced the words over her lips, drawing his attention back to her question—and frowned. His gaze lifted, and Lily caught his subtle look of satisfaction.

“Your brother does not owe me money, Miss Weston.”

Wary hope bubbled in her chest until his next words shattered the fragile emotion into a thousand charred pieces.

“He owes me this farm. Bennett wagered and lost it to me.”

No! Bennett would not have been stupid enough to wager Springhaven in a foolhardy attempt to save it, would he? Lily did not—could not—believe he would do something so reckless.

But he had. She could see the truth etched across St. Vincent’s resolute visage.

The sick, desperate feeling churning in her stomach boiled over. Her fingers pressed against her lips, trying to keep her nausea at bay. Lily concentrated on filtering deep, even breaths through her nostrils.

Springhaven was all she knew. To lose it would take away every joy, every comfort she had clung to in the three years since her mother’s death.

Bennett! Her mind screamed as she fought another wave of churning desperation. She pressed a hand against the sharp ache in her heart. She was homeless.