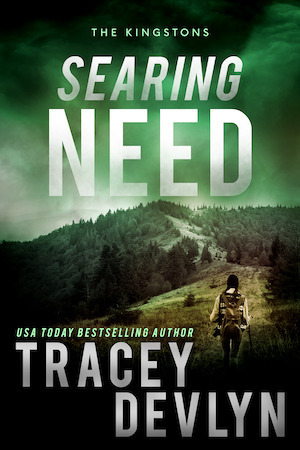 Her sister might be the law and her brothers the brawn, but Riley Kingston is definitely the brains of the family. She’s a talented botanist well on her way to a PhD—so why does she feel like a failure? Fired from a dream project in Costa Rica, Riley’s stuck back in her hometown. Cataloguing plants on Steele land keeps her busy, but it’s far from compelling work. Until she discovers a fascinating new specimen. One with a body made for pleasure . . . and eyes filled with a pain she longs to understand.

Delta Force operator Coen Monroe doesn’t want to be studied. Not even by the sexy scientist whose inquisitive glances stir up desires he isn’t ready to handle. He came to Steele Ridge to be alone, to battle his nightmares and the memories triggering them. But Riley’s gentle seduction is as relentless as her curiosity. She soothes his wounded soul . . . and fires up his defensive instincts. But once her research sparks a deadly conspiracy, Coen is exactly what she needs.

When Riley is targeted by a sociopath bent on silencing her forever, Coen will do anything to protect her. But can he save the woman he loves without losing himself in the process?