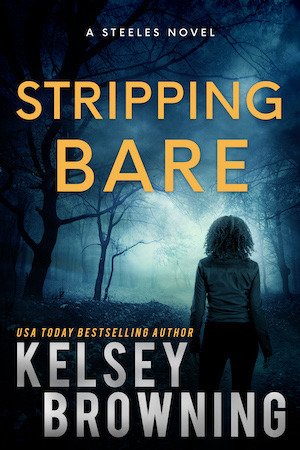 Video game mogul Jonah Steele may be a billionaire, but as the youngest brother in a family of alphas, his struggle to prove his worth is all-consuming. Although he saved his hometown from ruin, he can’t forgive himself for the biggest failure of his life.

As a teenager, Tessa Martin survived one of the most devastating nights of her life. Now, she’s a corporate psychologist and stronger than ever. She also has her sights set on Jonah Steele, her former boss and the only man who can track down the hacker who compromised her confidential client files. But can she confess that Jonah’s deepest secrets were exposed as well?

As the threat distorts into a real-life version of Jonah’s legendary video game, his and Tessa’s complicated emotional past—and the secrets buried there—could prove fatal. Will they strip away the past and reveal their feelings for one another, or allow it to blind them to a killer’s twisted game of revenge?

Jonah located another glass and poured Tessa a short shot, then filled his own to the rim. Just two friends, having an after-work drink. What the hell would friends talk about over a drink?

The holidays were always safe.

“Going back to North Carolina for Christmas?” he asked, injecting his words with casual good cheer.

With an absent hand, she reached for the glass and rotated it in a circle, gazing into the golden liquid. “Are you?”

“Is that what’s making you so unhappy tonight?” she asked, leaning forward. “That you’re not making it back home for the holidays?”

Restless, he rose and sipped his drink as he paced around his desk. On his second pass, Tessa caught him by the wrist. “Talk to me. Please.”

He rested his hip against his desk, but that meant he was close enough to Tessa to draw in her scent, cool and mysterious like a fall mountain morning. Trying to suppress the need she tripped off inside him, he blurted out, “It’s my sister’s birthday.”

“Why would that make you so unhappy?”

“Because it’s like she hasn’t been my sister in years.” Not really. Micki had withdrawn, day by day, as if she were fading away in front of everyone’s eyes. And then, right after she and Jonah graduated from high school, she’d simply left. Later, they found out where she was—Vegas. And who she was working with—a fucking fixer with some not-so-savory connections. “And because she’s my twin.”

Tessa picked up her glass and took a quick sip before pushing out of her chair. “Happy birthday,” she said, her voice husky. “If I’d known, I would’ve—”

“Tessa, go home. Please.” If she stayed much longer, he might spill more about his life. About how he felt. About what he wanted.

“Not while you’re drinking.”

He could play that game. His mouth quirked up and he tossed back the liquid in his glass. “All done.”

“Then why don’t I take you to dinner?”

He shook his head because what he was hungry for he wouldn’t find on a menu at a downtown Seattle restaurant.

Tessa reached out—slowly—and touched his face. Just a whisper of her fingers against the three-day stubble on his jaw. But it rushed through him like the scotch, leaving a scorched trail in its wake.

Before he could stop himself, he turned his head and brushed his lips across her palm. Her indrawn breath made it clear he’d surprised her, but she didn’t pull away.

In fact, she stepped closer and skimmed her thumb across his cheekbone. Her gaze was warm and soft, and her lips were parted. This was a woman who wanted to be kissed. By him.

God, he wanted that, too.

“Don’t.” Her touch shifted so that her fingers pressed against his lips, and he couldn’t resist rubbing them against her soft skin. “I have a feeling I won’t like what you’re about to say. If you’re worried this is inappropriate, you shouldn’t. After all, you’re the one person in this company who’s refused to talk to me.”

“I could be if you’d leave me alone.”

“Nice try, McSurly. Something else is going on here. I can see your pulse beating in your throat. Am I making you uncomfortable? Or nervous?”

Her mouth tipped up in a smile that was a combination of sweetness and pure seduction. She moved into him so that the buttons on her jacket brushed the front of his T-shirt. Her scent wound around him, making him drunk in a way the single malt never could.

Without thinking it through, he spread his legs so she could step between them. He cradled her hips between his thighs, and her skirt rubbed against the fly of his jeans.

Her eyes filled with heat. “Then kiss me.”