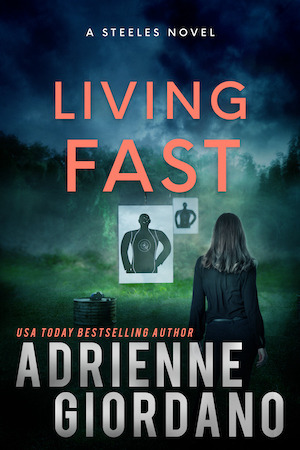 Can he protect the woman he loves from a cold-blooded killer—and win her battered heart?

Green Beret Reid Steele needs a new career ASAP. After a knee injury permanently sidelines him from his dream job, Reid heads home to the mountains of Steele Ridge to regroup, but small-town life isn’t cutting it for a man accustomed to action. When sexy boutique owner Brynne Whitfield captures his attention, Reid thinks he’s found the perfect distraction from boredom.

The last thing recently-dumped Brynne is interested in is another fast-talking man who will break her heart and dismiss her like yesterday’s trash. Even if Reid Steele’s body does make her yearn for things she knows are as bad for her as hot fudge sundaes.

When Brynne’s closest friend is murdered and she’s also targeted, Reid can’t resist the lure of action and goes on a hunt for answers to disturbing questions. But can he protect her from a cold-blooded killer—and win her battered heart?

Everything was going to hell.

Reid stood on the back end of his mother's property and stared out at acres upon acres of open land while his youngest brother, Jonah, rattled on about…something. Jonah's mouth was moving and words were definitely coming out, but by the time they got to Reid's ears everything morphed to a muddled rowr, rowr, rowr.

“Wait.” Reid shook his head to clear the fog. “Slow down. What I think you're telling me is that you want me to oversee building some kind of law enforcement training center? Here? In Mom's backyard?”

In the distance, the bright May sunshine reflected off the windows of the large empty building the town had intended to be a state-of-the-art sports complex.

The Baby Billionaire waved one hand at enough open space for a man to get lost in. “You can use the building already available from the defunct sports complex. And it's not exactly Mom's backyard. I gave her the house, but she doesn't care what we do with the rest of the twenty thousand acres.” Jonah flashed a grin. “I'm giving you seven of them.”

From the age of sixteen, he'd set his goals around becoming a Green Beret. The tip of the spear. The baddest of the bad. He wanted it all. And got it. At least until he jumped off the back of a truck eight months ago and blew out his knee.

All that work, the studying of foreign cultures and the accents and languages, work that he loved and shared and occasionally bitched about with the guys in his unit, was gone now. All of it.

He drew a deep breath and scratched a sudden itch on the side of his face. “Dude, this isn't my thing. I'm boots on the ground. What do I know about zoning regulations and all the bureaucratic bullshit that'll come with developing a training center?”

Jonah faced him, his hazel eyes direct. “We'll figure it out. All I know is I got a boatload of money wrapped up in this place and we need to revitalize it. I see this as a family operation. Last I checked, you were part of the family.”

Oh, leave it to Jonah to play that card. Reid held his finger up. “No one told you to use your own money to bail the town out of a bad deal. You made that decision yourself. And even if I knew anything about building a training center, maybe this isn't in my plan. You already did this to Grif, you're not railroading me into giving up my life.”

Baby Billionaire made a grunting noise low in his throat, looked out over the property he now owned, and after a few seconds turned back to him. “Let's take a minute here. Before we wind up bloody.”

Because, yeah, that had been known to happen with the Steele brothers. As much as they all loved each other, none of them had a problem throwing hands to settle an argument.

“Maybe I came at this wrong,” Jonah continued. “I don't expect you to give up your life or your plans, whatever they might be.”

Freaking Jonah. He knew Reid was at loose ends trying to figure out his next career.

One for a washed-up Green Beret.

And the occasional firearms safety lessons he'd been giving at one of the local ranges to bring in some money wouldn't cut it.

“My thought,” Jonah said, “is that you oversee the development of a facility where law enforcement agencies can send their officers for training. A privately owned police academy, if you will. Once it's done, you can go off and do whatever it is you're planning. Think of it as a temporary gig. You sure as hell have the skills for it. Who would know better than you what a facility like this would need?”

Reid looked out over the tall grass and shrubs. All that open land a prime location for a facility like the one he'd been trained on. In actuality, it might be fun. If he didn't have to deal with bullshit paperwork and being stuck in the small town he'd left at eighteen. Back then he'd wanted to experience the world. And he'd done it. Loved it, too. And he sure as shit didn't expect to give up that exploring at the age of thirty.

Again he scratched his cheek and tried to ignore his brother's stare. “I don't know; I'll think about it.”

Jonah sighed. “What if I pay you? Think of yourself as some hotshot consultant. Consultants get paid big bucks for shit like this.”

And now his little brother expected to pay him.

He'd sooner cut out his own eye than take Jonah's money. The kid worked hard for that fortune and shouldn't be giving it away.

“I'm not taking your money. We're family. My only issue is that I don't want to be tied down.”

Tied down and obsessing over his current circumstances. Something he despised. For years, he'd thrived on military life. The ability to serve. To make a damned difference. Now he didn't know where the hell he fit.

So he'd come home to regroup and figure out how to become whole again. Swapped out his BDUs for jeans and T-shirts and wound up in the middle of his calculating baby brother's plan to reenergize Steele Ridge.

“Who said you're tied down? Is this about the job in Georgia? Did they make you an offer?”

Two days earlier he'd flown to the land of peaches for a look-see at a private security operation interested in hiring former military guys for some overseas contract work. Thirty minutes into the interview, they'd offered him a job. But the damned knee. Could it hold up?

And did he really want to be doing private contract work?

“Yeah, they made an offer.”

Was he? Who the hell knew? Reid shrugged. “I don't know if it's the right fit.”

“Then do the build-out while you're waiting for whatever is the right fit. It's not like you have a plan otherwise.”

Well, that was part of the problem, wasn't it? He didn't have a plan. Except to not be in Steele Ridge permanently.