A Snapshot of the Red Wolf

From the moment I conducted an Internet search on endangered species of North Carolina and came across Canis rufus, I knew I had to share the red wolf’s story through Britt Steele’s eyes.

In Loving Deep, Randi and Evie presented Britt with a beautifully rendered mural showing the history of red wolves. Below, I've painted a brief picture of this incredible animal's fight for survival. Fair warning—the red wolf’s story is equal parts compelling and tragic, and highly debated among scientists.

Wolves have spiked fear and triggered man's competitive nature, in the form of hunting, for hundreds of years. At one point in our history, researchers believed red wolves roamed from southeastern Texas to central Pennsylvania. However, European settlers did their best to eradicate red wolves from America's landscape since their earliest days of sleeping beneath the New World's stars. 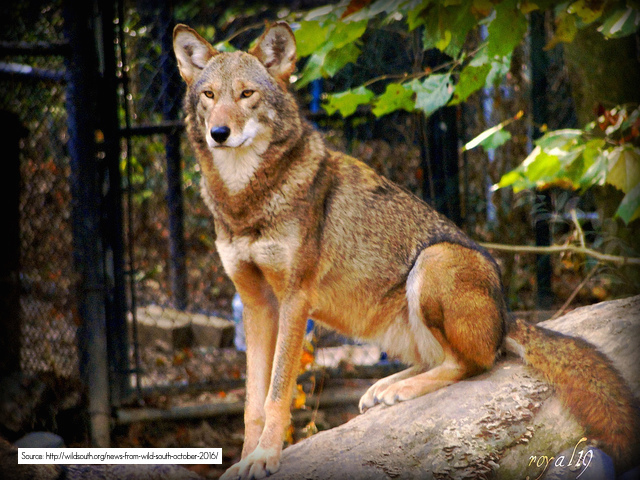 "in the Begining of the Night, we were awaken'd with the dismall'st and most hideous Noise that ever pierc'd my ears" ~John Lawson, early 1700s

"the government pays a bounty of ten shillings for each one killed" ~ August Gottlieb Spangenberg, early 1700s

During the span of a few years in the mid-twentieth century, the red wolf went from being noted as numerous to being listed as an endangered species. Trappers wanted them for their pelts, farmers shot them to protect their domestic animals, disease attacked their packs, and coyotes wooed their lone members away.

By 1986, the Alligator River National Wildlife Refuge became home to the reintroduced wolves--a place where they could be reborn in the wild. Much to the locals dismay.

After a bumpy start, the red wolf reintroduction program began to see serious progress. The captive-bred breeding pairs had pups and those pups matured to have pups of their own. Wild-born wolves slowly exceeded the captive-bred. The wolves' territory reached 250,000 acres and, eventually, expanded to 1.7 million acres.

In 1992, the program added a second reintroduction site--the Great Smoky Mountains. The Smokies seemed a great place--endless forests, few roads, fewer people, only one farmer nearby, and solid support from the community. But the GSM site turned out to be a dismal failure due to lack of prey, devastating disease, and pressure from other predators.

"Out of thirty-three pups born in eight different litters, only four survived past six months of age." ~ T. Delene Beeland

The site closed in 1998, though thirty wolves were never found. This element became the basis of my Steele-Shepherd pack in Loving DEEP.

In 1999, the Service finally, formally recognized hybridization with coyotes as a serious threat to wild red wolf recovery.

It took a long time for me to find the right words for this section. Even now, I'm still struggling with how to articulate the uncertain plight the red wolves face. 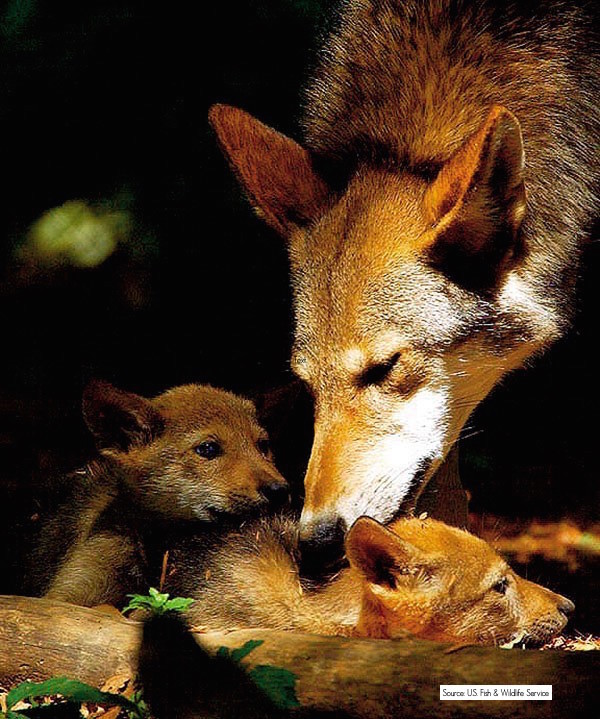 Thirty years after the wolves' introduction to Alligator River National Wildlife Refuge and these beautiful animals are still at risk. At the reintroduction program's zenith, nearly 200 wild wolves roamed North Carolina. Now, the wild population is down to less than 50.

The same forces that took the wolves to the brink of extinction a half century ago are still paralyzing their recovery today. Illegal shooting, habitat destruction, breeding with coyotes, and politics. The U.S. Fish & Wildlife Service's leadership has all but abandoned the reintroduction program and the North Carolina Wildlife Resources Commission has taken a stance against the program--both agencies apparently buckling under political pressure fueled by wealthy landowners.

But all is not lost. A powerful movement, involving Defenders of Wildlife, Animal Welfare Institute, and Red Wolf Coalition, is fighting to save this critically endangered species. Plus, many other environmental organizations are following the process closely. Seventy-three percent of North Carolinians support the red wolf recovery. The fate of the red wolf will now be played out in the court system.

If, after reading about their courageous story, you would like to help protect the red wolf recovery effort, send a letter to the U.S. Fish & Wildlife Service Director Dan Ashe and ask him to do everything possible to protect this beautiful and important animal. Also, there are many lawmakers in Congress who view "Earth" issues as low priority--or no priority. When at the ballot box next time, vote for candidates who are passionate about preserving nature and taking action now to reduce the effects of climate change. Every vote matters. This is one sure-fire way we can secure our children's future--and the Earth's.

Update Nov 2021: From the Wolf Conservation Center: USFWS Takes a Positive Step Forward for Red Wolves - U.S. Fish and Wildlife Service announced Wednesday that they are withdrawing their 2018 plan for managing the last wild red wolves a single population in eastern North Carolina consisting of just eight known (radio-collared) individuals. The rule, proposed by USFWS three years ago, aimed to reduce the existing five-county 1.7 million-acre Red Wolf Recovery Area by nearly 90 percent while limiting the wild population to just 10-15 individuals. It also sought to allow the immediate killing of any wolves wandering onto non-federal lands. Naturally, the controversial proposal was met with nearly unanimous opposition from the American public, and then in November of 2018, a federal court decision declaring that the agency violated the Endangered Species Act in gutting red wolf protections and ending proven conservation measures to recover them. USFWS responded to the court ruling by announcing its decision to delay all actions regarding its proposed rule, putting all recovery strategies on pause until now. Despite today’s announcement being long overdue, USFWS’s decision to finally withdraw its deadly proposal is excellent news for red wolves. It represents a positive step for USFWS towards bringing its efforts back in line with the conservation mandate of the ESA. The 2018 proposed rule will be officially withdrawn on November 15, 2021, upon publication in the Federal Register.

Update Jan 2021: From the Red Wolf Coalition:  U.S. District Court has ruled that the U.S. Fish and Wildlife Service (USFWS) must resume releases of captive red wolves into the Red Wolf Recovery Area in North Carolina. The USFWS halted these releases despite the fact that they are a proven tool for strengthening the red wolf population. The decision to terminate the release program, not surprisingly, put significant stress on wild red wolves—to the point where there may be as few as seven remaining. Now, with new wolves again joining the wild population, we expect to see increased overall numbers of wolves in the recovery area, as well as increased genetic diversity and improved opportunities for breeding. All of this means a stronger wild population and a much better chance against red wolves eventually being declared extinct in the wild. The Court's decision requires USFWS to develop a release plan by March 1, 2021.

Get the latest UPDATE from the USFW on the plight of this amazing animal.

The Secret World of Red Wolves by T. Delene Beeland